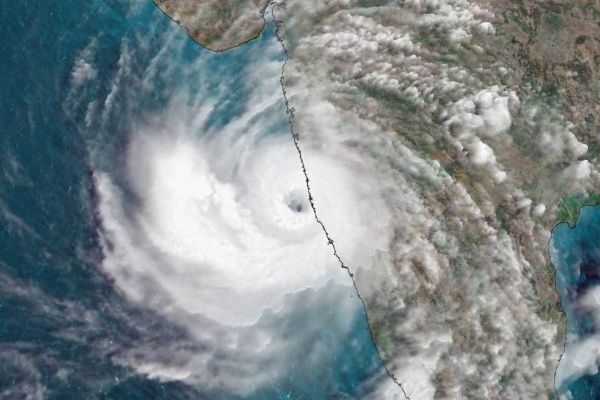 After ravaging through the coasts of Kerela, Goa, and Karnataka, cyclone Tauktae is expected to reach coasts of Gujarat later today. The cyclone, which has killed at least 7 people till Sunday, will gain speeds upto 185 kmph when it arrives at the shores of Gujarat.

In the morning the cyclone inched near Mumbai, forcing the concerned authorities to declare an orange alert. Chhatrapati Shivaji Maharaj International Airport also suspended its operations from 11am to 2pm on Monday.

Cyclone Tauktae, named by Myanmar, violently swept through the coastal areas of Karnataka, Kerela, and Goa. Karnataka, till Sunday, had reported 4 deaths. More than 70 villages in 7 districts were affected by the cyclone. 15 stations in the state recorded 200 mm of rainfall with Nada station recording the most at 385 mm. Karnataka's Chief Minister directed the officials in coastal areas to reach the affected areas and provide relief work.

Kerela is experiencing thunderstorms since Friday night which have damaged numerous crops and houses in coastal regions. Several dams reported rise in water levels in the state. A death was reported from the Idduki region, and at least 3 were reported injured. Hundreds of affected families were shifted to relief camps set up by the State Government.

Accidents due to heavy rainfall has contributed to 2 deaths in Goa. High intensity winds uprooted many electric poles disrupting the power supply in the area. Concerned officials have been working to normalise the situation. IMD Goa has predicted heavy rain in the region for the next two days.

Financial heart of India, Mumbai had to shift its patients infected with the coronavirus out of Covid centres to hospitals. Bandra-Worli sea link, Monorail services, and local trains in some parts were shut down as part of precautionary measures against the raging waters from the sea. Fortunately for the city, the cyclone is expected to come close but not affect the city much according to IMD.

The cyclone which at this point is recognised as a "very severe" cyclone will intensify into an "extremely severe" cyclone with wind speed touching upto 185 kmph by Tuesday. The shores of Gujarat are expected to bear the brunt of this extremely powerful storm. Over 1,50,000 people have been evacuated from the low lying regions of the state in more than 650 villages across 17 districts.

The Government also deployed 50 NDRF and SDRF teams as part of preparations. Gujarat Cheif Minister, Vijay Rupani told media that power supply will be damaged so the hospitals have been asked to ensure power backup. The Government has also put in place power breakup arrangements to ensure uninterrupted supply. He also assured that the Government has created buffer stock of Oxygen to ensure continuous oxygen supply in the hospitals.

Union Territories of Daman and Diu, and Dadra and Nagar Haveli are also expected to get a feel of the cyclone. The administration at these places had started reviewing their preparedness to safeguard its coasts.

The storm will touch the Gujarat shores between Porbandar and Mahuva in the district of Bhavnagar. According to the weather department Porbandar, Amreli, Junagadh, and Gir are expected to face the heaviest destruction by the storms. The coastal areas of Ahmedabad are likely to be inundated according to IMD.

Cyclone Tauktae has swept through India's western coasts at a time when the country is already reeling due to the destructive second wave of Coronavirus. To ensure the cyclone does not come in the way of India's fight against Covid, Union Home Minister Amit Shah, on Sunday, chaired a high level meeting where he reviewed the preparedness against the pandemic in all the affected and likely to be affected areas.

According to the officials in the meeting, The Home Minister guided districts to make adequate arrangements for the security and well-being of all the patients. Shah also looked at the impact of cyclone on Oxygen generation plants, and also ensured the affected states of all Government help and co-operation. Coast Gaurds, Army, Navy, Air Force units were also put on standby by the Home Ministry. Prime Minister Narendra Modi also had reviewed the situation a day before on Saturday.

Tauktae will become the strongest cyclone to hit coasts of Gujarat since 1988. IMD warned about the formation of low pressure in southeast Arabian Sea. As it came close to Indian coast, it intensified into a cyclone, and as it is moving ahead, it is further intensifying into severe cyclonic storm.

The storm will escalate even more as it moves north and reaches Gujarat. It is likely to become an extremely severe storm with wind speeds touching 185 kmph.

Cyclone Tauktae's (pronounced as Tau'Te) name originates from a Burmese word which translates to Gecko – a "highly vocal lizard". The cyclone was named by Myanmar. Cyclone names are given by countries on rotation basis in a region.

IMD has made clear that the current cyclone on India's eastern coasts is not expected to become a Super Cyclonic Storm, at the best (or worst), it will be an Extremely Severe Cyclonic storm.