The latest report by Swedish think tank Stockholm International Peace Research Institute (SIPRI) revealed that the global nuclear weapon deployment is on the rise for the first time since the end of the cold war. The researchers said the trend was worrisome.

"The overall number of warheads in global military stockpiles now appears to be increasing, a worrisome sign that the declining trend that has characterised global nuclear arsenals since the end of the Cold War has stalled," SIPRI researcher Hans M Kristensen said.

According to the report, 90% of the total nuclear arsenal remains with the cold war rivals i.e. Russia (former USSR), and the USA. The report also says that three countries, namely China, Pakistan, and India are rapidly modernising and boosting their nuclear arsenal. In this piece, we will be taking a look at India's Nuclear Power Program.

Developed countries like the US, and the EU are aiming for Carbon Neutrality, while developing countries like India are also under pressure to announce their net zero carbon emission plans. India is heavily reliant on traditional sources such as coal for its energy requirements. The demand for energy is going to increase further, and that is why India is desperately seeking alternatives. Though risky in other ways, Nuclear Energy does not emit CO2, and that makes it one of the options for India as it looks to reduce its carbon emissions in the future. 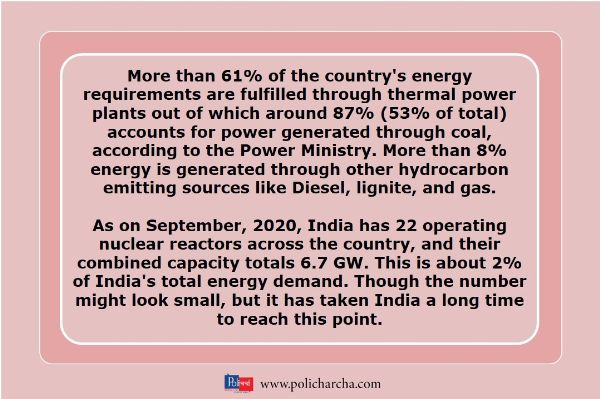 As on September, 2020, India has 22 operating nuclear reactors across the country, and their combined capacity totals 6.7 GW. This is about 2% of India's total energy demand. Though the number might look small, it has taken India a long time to reach this point. All of this started in the late 1940s under the supervision of Dr. Homi J Bhabha, who is also called the father of India's Nuclear Program.

The ambitious program was launched under the leadership of India's first Prime Minister, Jawaharlal Nehru. The Government of India established the Department of Atomic Energy, in 1954, with the sole responsibility of looking after the program. India had to devise a strategy to maximise its resources as it had very limited Uranium, but Thorium was present in abundance in the country. Thorium, however, in its natural state, cannot be used as a fuel. After a series of reactions, it needs to be converted into its usable “fissile” form. Therefore, a three stage plan was conceived with the installation of natural uranium reactors in the first phase, followed by fast breeder reactors in the second phase, using plutonium from the first generation reactors with either uranium-238 or thorium in the blanket, and eventually followed by reactors based on the self-sustaining Thorium-Uranium-233 cycle.

The first break came in 1974 when India tested a fission device. The Government of that time called it a ‘peaceful' Nuclear Explosion. The tests were condemned globally. Due to the global eye, India could not carry on with follow up tests. These tests invited international sanctions which barred India from buying nuclear technology and materials from outside. The limited Uranium availability, and these sanctions crippled India's pace. Moreover, India could not invest too heavily in it since it was a still a less developed country. Since late 1990s, however, the program got a decisive push.

As India industrialised itself, it also helped in accelerating India's nuclear program.

The unexpected nuclear tests in Pokhran in 1998 which were again followed up by US sanctions were the result of this acceleration.

The programme, nevertheless, got a new lease of life with a turning point in India-US relations under then American President George W.Bush. The negotiations resulted in Indo-US nuclear deal of 2008 or less commonly known as the 123 agreement.

The deal allowed India to import uranium, and enter into collaboration with other countries to build reactors. This freedom has ushered a new era in India's Nuclear energy plans that has allowed us to move rapidly in the last decade.

India is lobbying hard to get a membership of the Nuclear Suppliers Group (NSG). The NSG is a multilateral export control regime, and a group of nuclear technology supplier countries that seek to prevent nuclear proliferation by controlling the export of materials, equipment, and technologies which can be used to manufacture nuclear weapons. India portrays itself as a responsible nuclear power by pointing towards its 'No first use policy', and its positive record in non-proliferation.

The current Government has been quite vocal about India's plan to shift towards renewable energy sources from the currently used traditional sources. According to Planning Commission's report of 2006, India plans to generate 26 GW of energy by the year 2022, and increase it to 57 GW by 2032.

India is also under pressure to reduce its carbon emissions. Though its per capita carbon emissions are on the lower side, due to the huge population, India consumes a lot of energy. It is going to become the third highest energy consumer by 2030, according to the International Energy Agency.

Therefore, to make sure it's dependence on carbon emitting sources remains stable or goes down, India plans to increase its nuclear capacity to 63 GW by 2032, according to Ravi Grover, Vice-Chancellor of the Homi Bhabha National Institute, by building roughly 60 reactors. If successful, it would make India the world's second-biggest nuclear energy market after China.

Although the question remains, is it possible?

India's way to nuclear success was slow, but the scientific brilliance of Bhabha and other scientists, combined with the political will made sure it was steady. The country overcame many obstacles in its journey. Though the deal with the US eased out things, hindrances still remain.

There is a risk. The riches of nuclear power come in pair with the hazards of radioactivity. The world saw the damages caused by nuclear disasters of Chernobyl, and more recently of Fukushima Nuclear Power Plant. After the Fukushima incident, India too witnessed protests against some of the proposed nuclear plans.

While Nuclear energy solves the problem of CO2 wastes, it created a problem of its own – the radioactive waste. Experts are still contemplating about more effective ways of waste dumping. The usual pattern is to dig hundreds of meter deep into the ground, and dispose the waste down there, but certain apprehensions still remain.

The Uranium availability will always remain one of the major limitations to India's nuclear ambitions. The relaxation of sanctions through the N-deal has helped India to source the highly valuable material, but it is still not in sync with India's ambitious requirements.

India has huge thorium reserves which could potentially power its thorium reactors for hundreds of years to come. This forms the basis of its plans for the third stage, the large-scale deployment of thorium reactors. However, thorium technology continues to be a long-term goal, rather than an immediate option for the country. There is also the question of safety and security. No country in the world has yet demonstrated a viable and commercial thorium reactor programme.

Additionally, the nuclear power sector in India has witnessed its share of controversies and protests over issues of land ownership, location, as well as the safety & security of power plants in the event of natural or man-made disasters. These have also contributed to the time and cost overruns of India’s nuclear power projects. 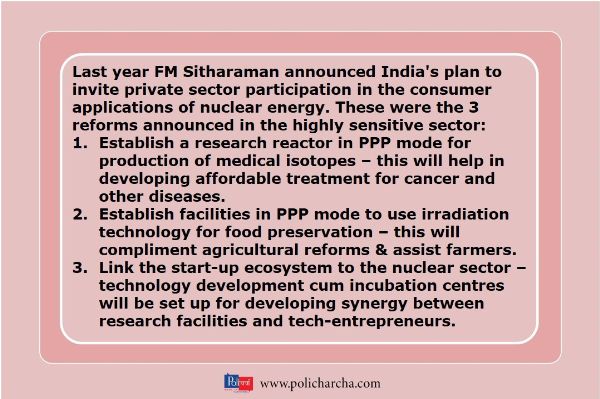 Current Government's love for privatisation has been on full display since they were re-elected. The Government is willing to bring in more and more private players in every field including the nuclear energy programme.

On May 26, the Department of Atomic Energy announced its plan to construct its first research reactor based on PPP model. It also stated that private entities that are willing to invest in the construction of the reactor and its processing units will get exclusive rights to process and market the radioisotopes produced in the reactor.

India has civil nuclear agreements with 14 countries, but Russia has always held a position of great value in India's Nuclear Program. Before the India-US Nuclear deal of 2008, India could not trade the raw materials needed for Nuclear Energy creation, since it was not a member of NSG. India is not a member of NSG still or a signatory to Non-proliferation Treaty (NPT), but the 2008 deal has made things easy for it. Before that, one of the major partners for India in this field was the Soviet Union.

India had signed agreements with Soviet Union as early as the 1960s. India was provided with heavy water by the USSR after Canada abstained from doing so because of the tests of 1974.

Throughout the 1990s, when India’s engagement with the global nuclear market was minimal, Russia remained a key supplier of nuclear fuel to India. When the NSG came up in 1974 in response to India's nuclear tests, the only country that kept assisting India was the USSR. Russia is still very important part of India's future nuclear energy programs.

It is fair to say that Russia has been a prominent partner for India in the field of nuclear energy, but it is also collaborating with China at a large level.

More on that, in the next article. Watch this space for more. 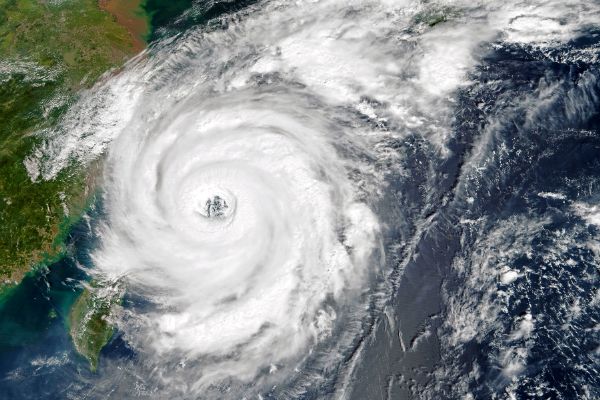